The Story Behind the Dress

Every girl can relate with the struggle of finding the perfect prom dress. But what happens when she doesn’t have enough money to afford a dress?

Former student at Nova High School in Florida Rebecca Kirtman wondered the same thing. She felt that no one should miss a high school event because he or she couldn’t afford to be there. In her freshman year at Nova, she launched a dress drive to provide gowns and accessories to high school girls in order to make prom accessible for everyone in her community. Although Kirtman passed away in 2003 at the age of 16, her legacy continues to grow nationwide, through the non-profit organization: “Becca’s Closet.”

Becca’s Closet found a home at Atholton four years ago, when Melanie Vaughn (‘15) started a chapter. Last year, her sister Adrienne Vaughn took over as the club’s president. The club had its prom dress drive on March 4th.

The event was a joint effort, with help from Becca’s Closet, NHS, JROTC, and Zeta Phi Betas. From 9 am to 2 pm, around 50 girls–ranging in age from 8th graders to seniors–shopped for dresses, shoes and accessories, while volunteers did make up, hair, and alterations on the spot.

“The event took a lot of planning. We started working on it September of 2016,” said Vaughn. “We expect to keep expanding, and hopefully double our number by next year. We contacted Parent-Teacher Associations from all over Maryland, and they were really responsive. We were able to reach inner city schools from DC and Baltimore, that we wouldn’t have been able to reach otherwise.”

In the past years the events were not advertised as efficiently as this year’s, because the club would contact the schools’ principals instead. Vaughn also added that the handing of flyers and social media presence were important.

The organizers of the event were not expecting for the girls to stay for too long, especially given that some girls came in from out of town, but “they stayed for hours,” said Vaughn.  “We were having fun, we had music, food. It was really nice, we had a good time, it was not an awkward thing, the girls were really comfortable.”

“It is super rewarding experience because you get to help people who get a free prom dress that they love, since they may not be able to afford one otherwise,” added the club member, Nikita Rajarajan. 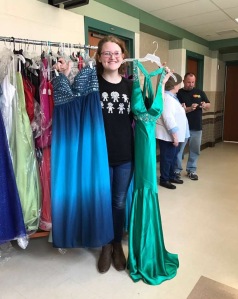 The event was intended for girls who could not afford a dress, but it was also open to anyone who could afford it, but needed a little extra help. “I am a single parent and I live [in] Howard County, but we still could use help with stuff like this, [things] that aren’t necessities [but] are still out of reach for us.”

All the dresses that are given away are donated to the AHS’s chapter by students or stores. The process of donating a dress is relatively easy: you contact a club member and then arrange a time to drop off the dress at the school.

“When a store donates, it is helpful for us as much as it is for them, since when stores donate, they are able to write off on their taxes,” said Vaughn. The club receives the donations, and sorts through them to see if they are in fit condition, or if they need fixing or cleaning. When a dress is likely not to be chosen it is donated to goodwill.

Regarding to the future,Vaughn: “We are planning to have a dress drive right after prom, because people will be thinking about what to do with their dresses. I mean, who wouldn’t want to support the cause and donate a dress rather than have it sit in their closet for years.”

The club’s dress drives carry on Rebecca Kirtman’s belief that no matter if you have more or less, everyone deserves a dress.